With sprawling seagrass meadows, meandering mangroves that hug the shoreline, and clear water, the Bahamas is home to dozens of iconic species, including the curious and playful Atlantic spotted dolphins. Yet, changing environmental conditions and human activity threaten their survival.

In 2013, 52 of approximately 100 Atlantic spotted dolphins left their home in the shallow waters of Little Bahama Bank (LBB) off Grand Bahama Island, travelled 100 miles south and relocated to a new island, Bimini. For at least 30 years, the spotted dolphins lived on LBB. No one could have ever guessed that one day they would just be gone. But that’s exactly what happened. And Bimini was already home to an existing resident population of both spotted and bottlenose dolphins. We wondered: What will happen next, and will it happen again?

I, and other biologists who work with the Wild Dolphin Project (WDP), led by founder and research director Denise Herzing, PhD, suspect that the dolphins left to find new food sources due to a crash in the food web on LBB. Leading up to the exodus, we found that chlorophyll levels dropped in the region. Chlorophyll is a pigment produced by microscopic marine algae, called phytoplankton. Scientists can monitor chlorophyll levels to determine the health of an ecosystem since phytoplankton is at the base of the food web, providing sustenance for shrimp, snails, and jellyfish. If phytoplankton levels drop, everything else will drop too, including the numbers of flying fish and squid that spotted dolphins rely on.

After the initial migration event in 2013, we spent the next several field seasons monitoring both locations and learning about the resident dolphins who already lived off the island of Bimini on Grand Bahama Bank (GBB). I remember the first time entering the water with the Bimini dolphins. They were seemingly so familiar in appearance, but there was no question that these individuals were total strangers. We didn’t know them, and they didn’t know us, unlike the dolphins off Grand Bahama who would come leaping excitedly to the bow of our research vessel to catch a ride. The Bimini dolphins sounded different, too. I heard them make barking sounds that I had never heard the spotted dolphins from LBB make. “It’s likely that the dolphins do have different dialects. This has been found in many other areas,” Herzing said.

We wanted to find out what would happen when the two groups encountered each other. Would they fight over food or befriend each other for increased mating opportunities? “I had no idea what they would do,” said Herzing. “I was primarily concerned that they would be competing for food resources.” To determine how the move impacted social structure, researchers from the WDP analysed the dolphin relationships after the move, led by Cindy Elliser, PhD, a research associate with WDP and researcher director and founder of Pacific Mammal Foundation. From 2013 to 2020, WDP recorded a total of 206 dolphin encounters off Bimini and collected data that included individuals present and behaviours such as fighting, playing, mating, feeding and travelling. Sometimes, groups were made up of only the resident Bimini individuals, while other times, the groups included solely the immigrants from Grand Bahama. 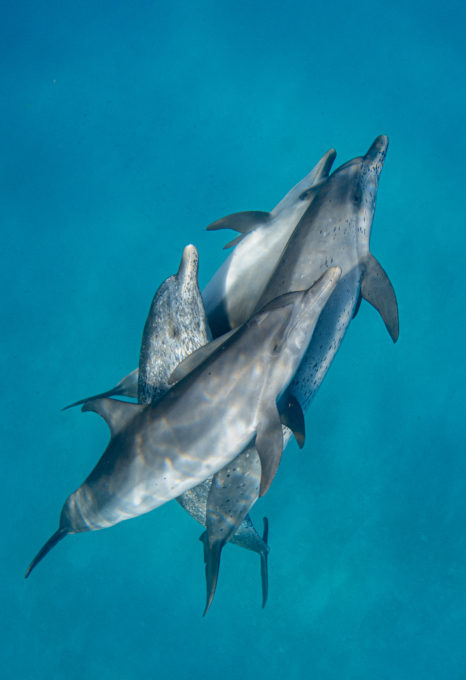 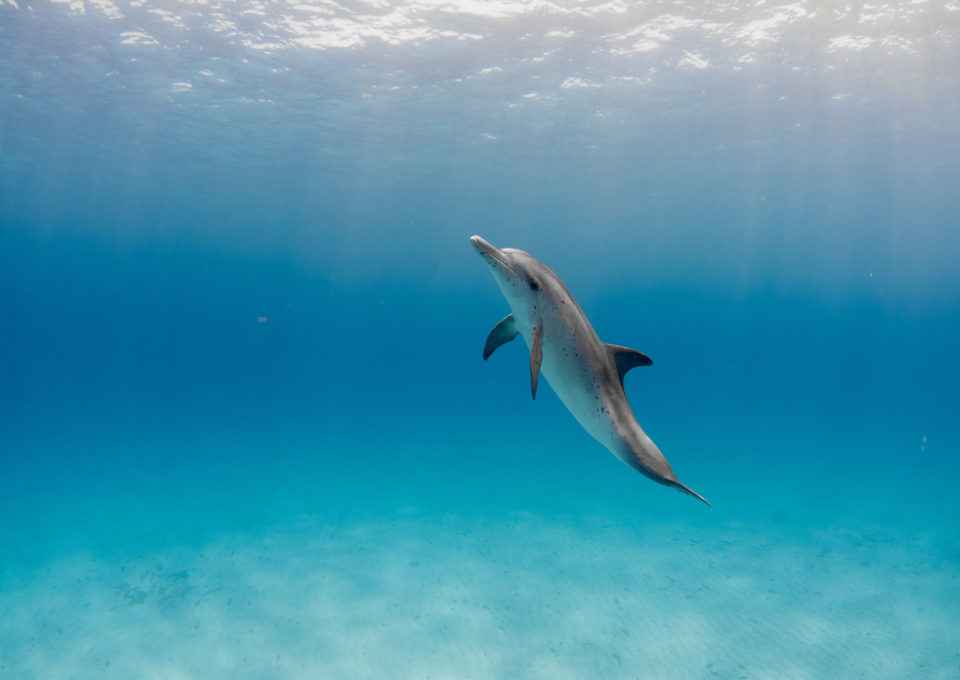 “SOCPROG is a wonderful programme that allows you to look quantitatively, with numbers, at the relationships you see. It provides a numerical ratio about how much time two individuals spend together,” Elliser said. “This gives us a way to see which relationships are stronger and we can then relate that to sex, age, and residency status. It enables us to really dive into how the relationships we see shape the social structure of a population or community that is critical for its survival.” Results from the recently published study in the journal Marine Mammal Science reveal that for the first three years after the move, the two groups remained separate. Then things started to change, and the two groups began to interact more frequently. Yet, while the two communities were integrating, there were still strong bonds within the original communities

While none of the researchers knew what to expect, the results weren’t too surprising. “I thought they would eventually mingle, but certainly not right away,” Elliser said. “They have a complex social structure, and while they do create new relationships, much of that structure is based on their past relationships. Generally, you hang out with those you already know, so breaking out of that in a new place could be hard. But it is also inevitable – if you live together and share resources, you will have to interact eventually.”

What was surprising, however, was an alliance that formed among three males; two individuals, called Lord and Drogo, from GBB, and one from LBB, named Lhasa. Elliser pointed out that while male dolphins have one or two friends for life, their social networks are typically smaller than those of females. Male relationships also generally form much earlier in life when they’re juveniles, even if these relationships aren’t solidified until adulthood. “This relationship may indicate that males had an important role in the connection between the two groups, perhaps more than females,” Elliser added. “This is truly a unique study showing the full integration of a displaced spotted dolphin community in the northern Bahamas with a local one in Bimini. After watching their gradual integration, this paper describes their full integration over seven years, males and females, young and old. Only long-term field work and a dedicated research crew of the WDP can illuminate such complex behaviour,” said Herzing. “It shows us the importance of long-term research, especially now that climate change is impacting ocean habitats.”

For Herzing, what was most shocking after the 2013 immigration event was the splitting up of families. “Mothers and their offspring usually stay in the same area. It would be normal to see a grandmother with a mother and her offspring,” said Herzing. These relationships are important for learning. For instance, younger females gain valuable practice by babysitting their nieces, nephews, and younger siblings. “Think about it in terms of humans. It is not just about our ability to physically survive, but our ability to survive as a community. They survive together, as we do, working together,” said Elliser. “How the individuals work together and what they can contribute to the society are critical for how successful they are. Dolphin societies rely on social connections and when those are impacted, they can have significant effects on the population and ultimately their ability to survive.”

In addition to analysing the social relationships, WDP graduate student Brittini Arlene studied how the two groups of dolphins behaved with each other and used the bank. In mixed groups, she found more courtship, more aggression and less foraging compared to resident-only groups. “It will be interesting to see if after an initial time of transition, aggression declines,” she said. Arlene also found that while there was some overlap of ranges, the immigrants maintained larger ranges in lower quality habitat on the bank’s northern end. The Bimini residents had access to more desirable daytime habitat. “While the northern part of the sandbank is likely less protected, it may give them exclusive access to the deep-water edge for nocturnal foraging.” After all, spotted dolphins were observed feeding off the sandbank in deep water for squid and flying fish at night. “There are costs and benefits for both the immigrants and residents when the migration event occurred,” Arlene said. “The immigrants are now able to meet their energetic needs, but it comes at the cost of maintaining a larger and lower quality range, while dealing with aggressive encounters with residents. However, they both have the benefit of increased courtship and mating opportunities.”

For the most part, both dolphin groups seem to have found their way to get along at times and have been observed to socialise. “It’s a large area and it looks like, at least so far, there is enough space and food resource for all the dolphins. But that could change with climate change,” Herzing said. Scientists predict that climate change will lead to more frequent and intense hurricanes, which can impact the social structures of dolphin groups when individuals die or move away from the storm. In 2004, Hurricanes Jeanne and Frances hit the Bahamas. Just like Hurricane Dorian of 2019, Frances hovered over the Bahamas for days before heading toward Florida. Additionally, both Frances and Jeanne hit within a few weeks of each other. When WDP returned the following summer for their normal field season, about 30% of both the spotted and bottlenose dolphin communities were gone. They most likely died, because those dolphins were never seen again in the region despite attempts to find matches among catalogues of different research groups around neighbouring islands.

As mammals, dolphins need to surface every few minutes to breathe. The researchers suspect that the hurricanes that lead to large, continuous waves, heavy rain and wind, might have made swimming and breathing difficult for these animals. In particular, Elliser suspects, new calves might have struggled to survive as they are often born in autumn, and need to learn to swim, breathe and nurse shortly after. In addition to the losses, the animals’ behaviour changed. The groups spent far less time socialising and spent more time travelling. Another possibility is that the storms change food availability or some aspect of the food web. Hurricanes are known to kick up dirt and sand in shallow water which can kill fish that suffocate when their gills get clogged and the water is devoid of oxygen. Coral reefs and seagrasses die when sunlight gets blocked by the stirred-up water. And storms can destroy habitat directly too. According to Bonefish and Tarpon Trust (BTT), a Florida-based organisation, its initial surveys suggested 73% of mangrove forests in Grand Bahama and 40% in Abaco were damaged or destroyed due to Hurricane Dorian in 2019.

“It’s difficult to imagine how these shallow water environments will continue to sustain many top predators in the future – not with many more storms at that intensity,” said Diane Claridge, PhD, executive director of Bahamas Marine Mammal Organization (BMMO). In a recent study in Mammalian Biology, Claridge and other marine mammal scientists with BMMO explored whether hurricanes may have influenced the survival rates of calves, juveniles or adults in the South Abaco bottlenose dolphin population. They found evidence that survival was indeed linked to hurricane activity, and that it led to increased deaths or emigration. Estimated survival declined by 9% in adults, 5% in juveniles and 36% in calves.

At some point the changes may be too much, too close together, too fast or remove too many in the population for them to be able to adapt effectively.