‘Tren Maya’, a new railway construction project on Mexico’s Yucatan Peninsula, is putting the region’s cenote network at risk. But President Obrador’s plan is met by increasing criticism – at the helm of the opposition is environmentalist, scientist and diver Camila Jaber.

When it comes to the greenest forms of mass travel, there is very little that competes with the modern train. The construction of a new trainline often also represents progression, a centuries-old physical representation of advancing opportunity, the connection of once cut-off communities to bustling heartlands – railroad arteries flowing with a nation’s lifeblood.

When Mexican president Andres Manuel López Obrador announced that his government planned to build a new railway to traverse the Yucatan Peninsula, one of the poorest regions of the country, the project was, perhaps unsurprisingly, met with positivity – it would bring jobs and opportunities to an area that desperately needed stimulus and allow the tourism sector to grow out from Cancun, the peninsula’s most popular destination. All while using one of the greener forms of public transport available. Constructed in the Mayan region of the country, the project was dubbed ‘Tren Maya’. When ground was officially broken for the first time, a Mayan ceremony took place to bless the project. Everything seemed in order.

Then cracks began to show. These weren’t the first cracks to appear in the region: the Yucatan peninsula is a unique part of the world, as it is mostly made of limestone. At one point it probably was a shallow coral reef system. Then a massive meteor hit the area, creating a crater 20 kilometres deep and 180 kilometres in diameter, sending cracks out in all directions. You might have read about it, it was the meteor that brought an end to the age of the dinosaurs, the dust from its impact creating a sun block and with it an ice age.

The consequential ice ages and the porous nature of limestone meant that over millions of years interesting geological things occurred in the Yucatan. The ice ages caused sea levels to drop, giving rainwater the chance to filter through the limestone, mix with seawater, create hydrosulphide, and erode the cracks further. Then the sea would rise again, supporting the caves that had formed from the erosion. When the sea dropped again, these caves would lose some of their support and often the ceiling would collapse, creating the cenote network, or sinkholes, so typical for the Yucatan region. It is suspected that the area has more than 6,000 cenotes, with some estimates as high as 10,000, and that they are connected via cracks, creating a massive aquifer and multiple cave systems, including the largest underground cave and cenote system in the world, Saac Actun.

This aquifer is what’s irrigating the province today, giving the Quintana Roo state its fresh water, a source for both flora and fauna to prosper. Previously, the main danger threatening this system was pollutants like pesticides and fertilisers, as these would seep through the limestone and into the interconnected water system. With the new train line, however, came some new threats, new cracks.

The consequential ice ages and the porous nature of limestone meant that over millions of years interesting geological things occurred in the Yucatan. 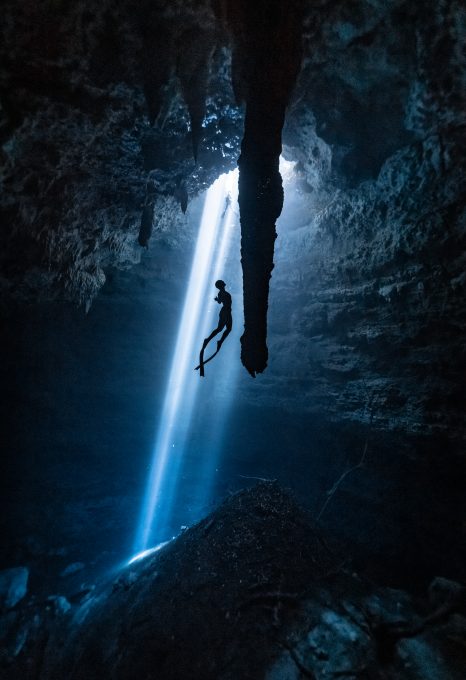 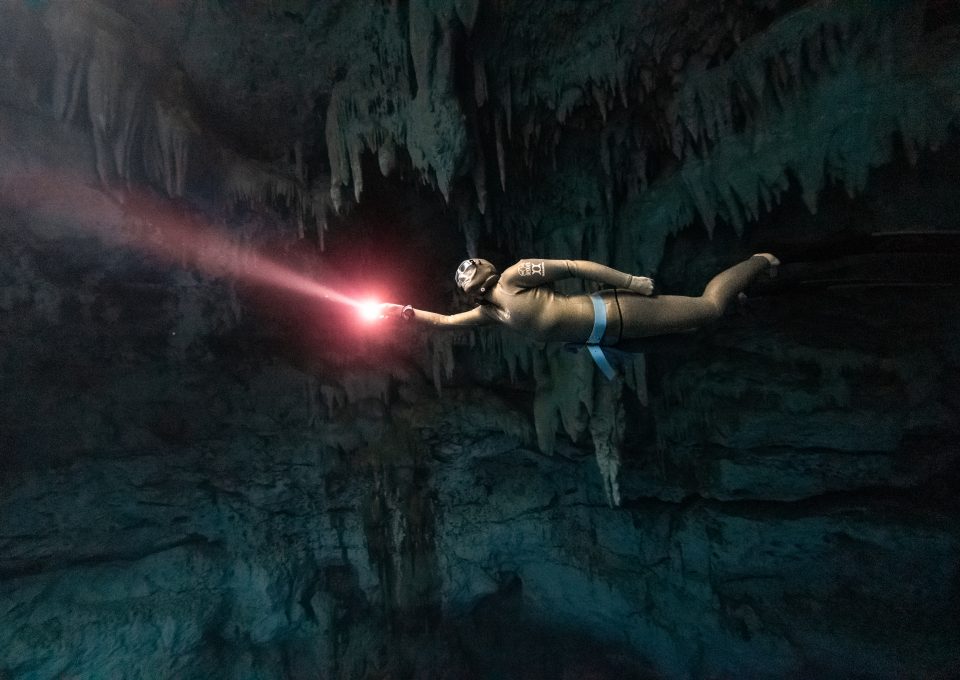 The line was originally planned to be 100% electric. Diesel powered locomotives are now due to run the new rail, bringing with them more pollutants and particulate matter. The route has also been changed. The track was originally due to run alongside the 307 highway, the main road along the Yucatan’s Riviera Maya coastline. However, as construction began, it caused havoc for road users, the level of traffic quickly becoming unworkable (and, presumably, bad for the project’s political optics). The line was moved 4km inland, in the heart of Saac Actun.

Prior to this move being green-lit, no research was undertaken into the potential damage the construction could have on the cenotes over which the trainline would now run. Additionally, no consideration was made for the fact the new route would run through Mayan villages and protected forests, critical habitat for rare creatures such as jaguars. Naturally, ecologists and other experts started protesting the track’s move. President Obrador countered, saying the protests were politically motivated and that the benefits of the train outweighed the natural sacrifices that would have to be made. He insisted the jaguars could be relocated and that for every tree cut down a new one would be planted elsewhere. His counter arguments had one vast, glaring omission: the cenotes.

Over the last 50 years, the Mexican Yucatan has developed a reputation as the best cave and cenote diving destination in the world. After the beaches and bars, diving is the largest attractor for tourism in the Riviera Maya. In the last 10 years, Tulum has become a hotspot for yoga, and alongside it, freediving schools have popped up – the tranquil cenote network is an ideal place to learn the sport and explore on a single breath. Simply put, diving in all its forms is a major tourist attraction here and the trainline’s new route has caused much concern within the industry.

Diving in all its forms is a major tourist attraction here and the trainline’s new route has caused much concern within the industry. 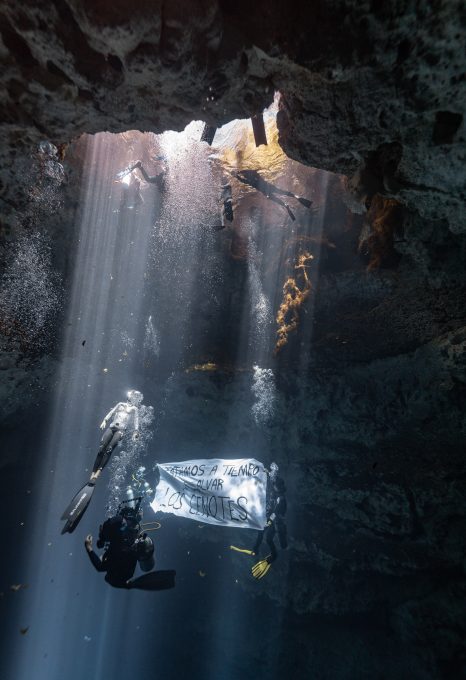 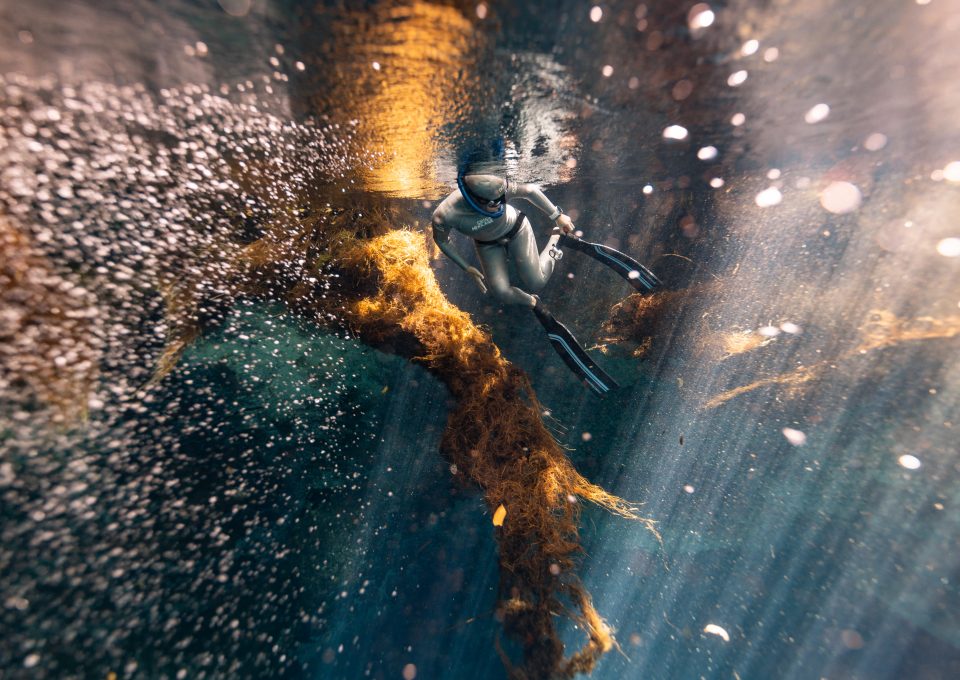 The worst-case scenario is that the new train line will collapse on an underground river and block the whole thing.

With scientists, environmentalists and an entire industry of dive tourism professionals protesting the train line, President Obrador is facing a growing challenge. Pivotal in this alliance of cenote defenders is Camila Jaber, a scientist, environmentalist, and diver. Born and raised in the Yucatan, she is an engineer with a focus on water resources, an outspoken defender of the cenotes, and a national record-holding freediver and freedive instructor. She is also only 26 years old, with all the social media savvy that comes with youth – she is the perfect storm gathering outside the presidential palace.

In April 2022, Jaber was invited to meet with the President as part of a group of experts and celebrities who opposed the trainline. In a viral video, actors, singers, social media stars and environmentalists spoke out against the construction of the line. It gathered so much momentum that the President invited some of those featured – mainly the celebrities – for a talk at his office. For Jaber, it represented an opportunity to fill in what she perceives as gaps in Obrador’s knowledge. “I don’t think his advisors give him the full picture,” she says, “or maybe they don’t know either. No comprehensive study has been done on the possible environmental and socio-economic effects of this project. It’s a rush job.” At the very last minute, Obrador cancelled the meeting.

Obrador wants the project finished by 2023 – before the end of his first term. It is this desire to shoehorn completion into an unsuitably short period of time that Jaber finds so alarming: “A huge project like this takes eight to 10 years to plan and execute safely. To target completion in three years is insane – they’ll have to cut so many corners to get there, they’ll end up with a spiral. The decision to move the line away from the 307 highway is the perfect representation of this – a snap decision to avoid traffic issues and disputes with hotels about land. The decision works for the timeline, but it doesn’t work for the jungle or the aquifer.”

The impact of the change in plans is hard to calculate. “We know that anything you do in that region spreads out to the rest of the state, as the water flows from the North-West to the South-East. Previously, the main problem for the cenotes has been pesticides and fertilisers – the fertilisers have caused an enormous increase in the quantity of sargassum, which is now covering large swathes of the Gulf of Mexico and pretty much choking it. Whatever happens to the aquifer and the cenotes won’t stay an isolated issue, it will spread. The whole of the Yucatan depends on the cenote network and the aquifer for its water; the worst-case scenario is that the new train line will collapse on an underground river and block the whole thing…”

This is only a short excerpt of the story. Read the full story, Supermayan, in Issue 25 of Oceanographic Magazine.

The worst-case scenario is that the new train line will collapse on an underground river and block the whole thing.