After a 70-90% population decline towards the end of the last century due to overfishing, sand tiger shark numbers continue to recover along the east coast of the US. In North Carolina, species recovery seems particularly strong. Why?

Ninety feet underwater and 22 miles off the coast of Morehead City, North Carolina we made our way inside the wreck of the US cable-laying ship Aeolus. Carefully unspooling my reel line to navigate through the sunken vessel, I glanced at my instructor. He gave a nod of approval and we continued our slow advance. It was the summer of 2009, and I was making my first dive off of North Carolina to earn a wreck diving certification. Concentrating on the tasks at hand, I turned a corner to enter an open area inside of the Aeolus. That’s when I saw the sharks. Six sand tiger sharks circled inside the shipwreck, rows of jagged white teeth jutting from their jaws. Their bodies were sleek and streamlined. I was in awe as they effortlessly cut through the water. One of the sharks passed only a few inches from me. As we made eye contact I felt no fear, just wonderment. These animals were beautiful and graceful – two words I had not associated with sharks before. When my instructor and I began to retrace our steps out of the wreck, I glanced back at the sand tigers. I knew I would have to return to see them again.

My fascination with sharks started with that first sand tiger encounter. I quickly realised sharks were not the vicious monsters they are often portrayed to be, and I was shocked to discover that tens of millions of sharks are killed every year. Several species are on the verge of extinction. I learned about the horrors of shark finning, and how commercial fisheries using longlines and gill nets are depleting shark populations critical to the health of the ocean. I became involved in shark conservation, and eventually decided to start photographing sharks in the hope my images might inspire others to protect them too. I left the corporate world behind to become a full time underwater photographer and conservationist. All because of the sand tigers of North Carolina. These sharks quite literally changed my life.

Sand tiger sharks, also known as grey nurse sharks or ragged tooth sharks, are a migratory species found in warmer coastal waters throughout the world, with the exception of the eastern Pacific. They prefer shallow water, usually staying above 600ft, where they feed on small bony fish, crustaceans, stingrays, and smaller sharks. Adults typically measure between seven to ten feet, weighing an average of 200-350 pounds. Females are slightly larger than males. While juvenile sand tigers are sometimes prey for larger sharks, adult sand tigers have no major natural predators.

Sand tigers can breathe by two means: by swimming forward to push water past their gills or by using their cheek muscles to propel water into their mouth and over the gills. Since they do not have to continually move to breathe, it is common to find sand tigers resting on the sea floor or hovering motionless in the water column. To control their buoyancy, they swim to the surface where they gulp air, holding that air in their stomach like an internal balloon. As they descend, they can expel air through the mouth to fine tune their buoyancy. They are the only shark species known to do this.

Male sand tigers reach sexual maturity around six to seven years of age while females reach maturity between nine to ten years. Females have two uterine chambers, one on their left side and one on the right, where 16-23 eggs are fertilised after mating. The first embryos to hatch consume the other embryos and the remaining unhatched eggs in a process known as intrauterine cannibalism. In the ultimate example of prenatal survival-of-the-fittest, the last remaining embryo in each uterus is born after a nine to twelve month gestational period, with each pup measuring between 37-41 inches long. The mother sand tiger does not tend to her young after birth; nor is there much need for her to since the two new pups are already experienced predators, having hunted and devoured their siblings before birth. Sand tiger sharks only give birth to two pups every two to three years, resulting in one of the lowest reproductive rates of any shark species. 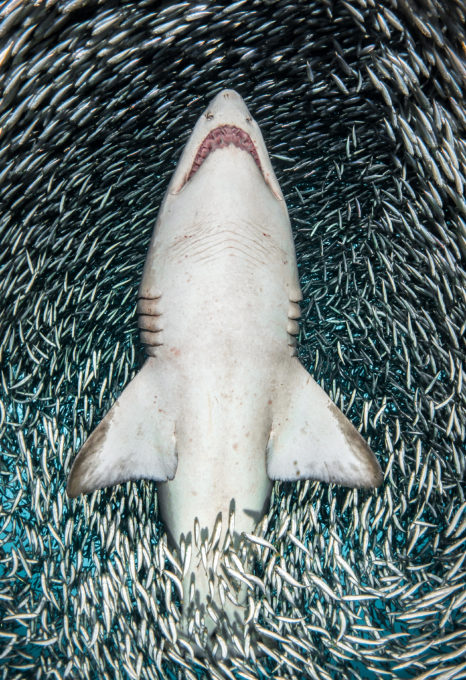 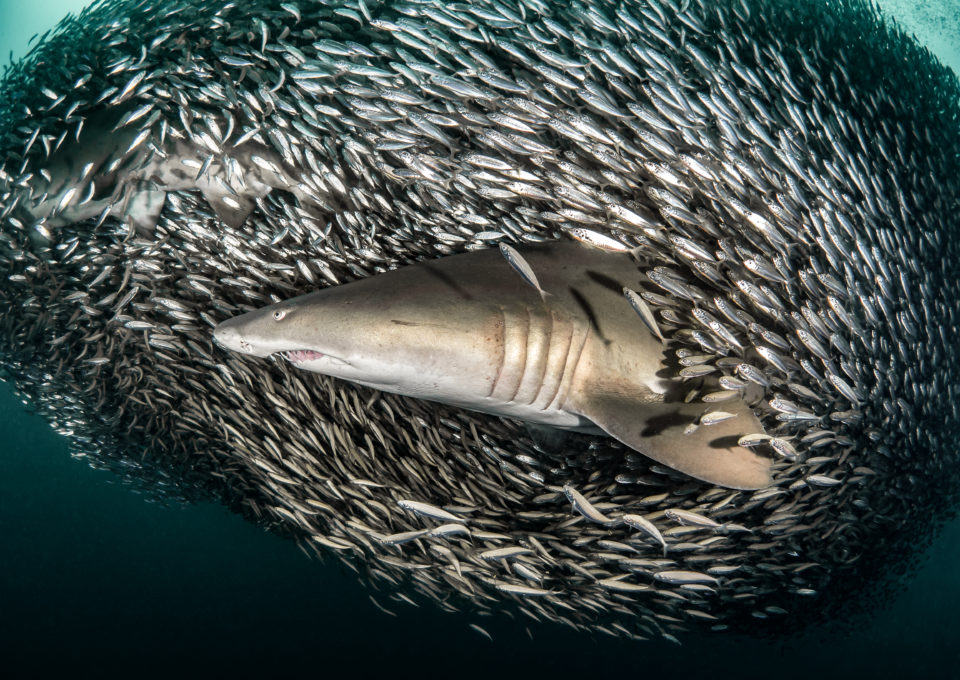