In Florida, Coral Restoration Foundation™ is tackling the seemingly impossible task of restoring an entire ecosystem. Alexander Neufeld, the organisation’s Photomosaics and Technology Coordinator, reveals what hurricanes, coral restoration and cameras have in common.

As part of their camera rental partnership with Coral Restoration Foundation™, the Danish dive camera manufacturer Paralenz seeks to help restore corals throughout Florida by providing important data. Their Blue Friday campaign will not only make their Vaquita camera more widely available, but will also directly help Coral Restoration Foundation™ in their efforts to plant and protect coral reefs in Florida. Scroll down for more info.

About half an hour south of Miami International Airport, the bustling Ronald Reagan Turnpike merges with US Highway 1 and southbound travelers enter ‘The Stretch’. For the next 18 miles, you hardly even need to touch the steering wheel, as you traverse the sea of grass at the boundary of Everglades National Park. This part of the highway spans the last bit of continental United States before you enter the Florida Keys, a string of islands that run southwest towards the country’s southernmost point of Key West.

It was New Year’s Day in 2016 when I drove The Stretch for the first time. As midnight approached, I was wrapping up my 24th hour of driving, a two-day trek from my hometown of Goshen, Indiana to Key Largo, Florida. My front passenger seat slowly accumulated granola bar wrappers and empty energy bottles. My backseat and trunk were stuffed with all of my worldly possessions (not much, admittedly, for this recent college grad) and my pet salamander, Hades. It was pitch black (to this day The Stretch still has almost no streetlights) so all I saw was a lane line that marked an unsettlingly narrow highway shoulder.

I made this first of what would be many trips across The Stretch to begin a four-month internship with Coral Restoration Foundation™, a marine conservation non-profit headquartered in Key Largo. By the time I arrived at CRF™, the organisation had already been around for over a decade, but was on the cusp of a massive growth spurt. CRF’s core work involves growing endangered species of Caribbean coral – primarily the branching species staghorn and elkhorn – in offshore nurseries and then ‘outplanting’ these coral colonies to degraded reefs sites throughout the Keys once they reach maturity. Conceptually, there is nothing new about this. Aquarists have been fragmenting and growing clonal coral colonies for decades. Scientific studies have consistently shown coral outplanting to be an effective way of safely reintroducing individual colonies to wild reefs. But by 2016, it was the scale at which CRF™ was beginning to operate that was truly revolutionary. 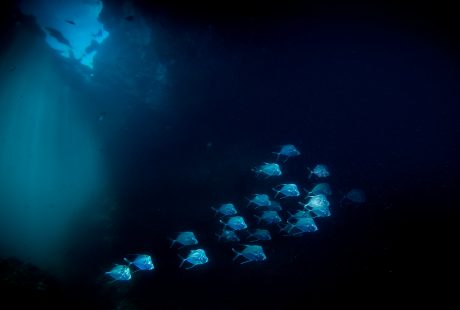 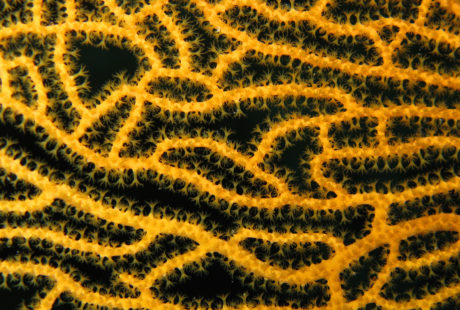 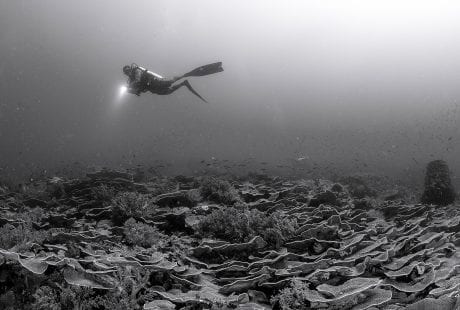 CRF’s core work involves growing endangered species of Caribbean coral in offshore nurseries and then ‘outplanting’ these coral colonies to degraded reefs sites throughout the Keys once they reach maturity.

So how did my corn fields of northern Indiana turn into a tropical scuba diving destination at the edge of the country? When I declared my biology major and enrolled at Indiana University, I was dead-set on graduate school and academic research, or maybe even medicine. But what I stumbled upon during my freshman year was a fully-formed academic diving and underwater science programme, a ‘scuba oasis’ at the centre of the Midwest. I took my first course, which provided me with my Open Water Diver certification, and then I took another course, and then another, and then another…

By the time I graduated, I had college credits from classes like ‘Rescue Diver’ and ‘Professional Diver Development’, as well as field courses in Grand Cayman and the Dominican Republic. And somewhere in the middle of all this, I realised that academia – with its jargon, its graphs, and its ‘statistical soup’ – was insufficient for properly communicating the science I was now doing to anyone who would never don a wetsuit or inflate a BCD. So I dropped my tiny point-and-shoot camera into a dive housing and started documenting everything. Bingo. My eyes had been opened to the world of underwater photography.

After my CRF ™internship ended, I assumed a new, full-time position with the organisation, managing field data for what had become the largest coral growing and outplanting effort anywhere in the world. By this point in time, CRF’s largest in-situ nursery housed over 40,000 colonies of endangered corals, and we were outplanting over 15,000 colonies annually. At this stage I also become the in-house cameraman at CRF™, and this opportunity to demonstrate to the world the daily impacts of our organisation was a point of immense personal pride.

But then suddenly everything changed. I had to leave the Keys, along with most of my fellow residents. On September 10 2017, Hurricane Irma made landfall about 20 miles east of Key West, the first major hurricane to strike Florida since 2004. I evacuated back to my family’s home in Indiana but as a Keys resident, I was eventually given permission to re-enter following several weeks of emergency cleanup and aid. I crossed The Stretch to see for myself what locals were already calling ‘Irmageddon’. Telephone poles and power lines were still down along the highway. The massive Publix grocery store sign in Key Largo lay in a crumpled heap of metal and plastic. Jet skis were washed up hundreds of feet into the mangroves and I vividly recall driving past a three-story house that had collapsed upon itself and sunk into the ground.

On September 10 2017, Hurricane Irma made landfall about 20 miles east of Key West, the first major hurricane to strike Florida since 2004.