The palm trees loomed, stretching over the dunes like sleepy giants shading patches of sand from the scorching sun.

The beach looked bright and white – not an umbrella or beer can in sight. I focused on the horizon, trying to make out the point at which the brilliant sparkle of the water separated itself from the clear, blue sky.

I sighed, closed my laptop, and gazed instead at the reality outside my window. I watched the now familiar routines of suburban Virginians living life during a pandemic. Coronavirus has forced us all to make shifts in our day-to-day lives. It has caused indescribable grief in millions of families and brought plans for the future crashing down.

When my university transitioned to virtual learning in autumn 2020, I considered taking the semester off to gain experience in marine conservation. I planned to work with La Tortuga Viva, an organization in Mexico dedicated to supporting the local community through protecting the environment, particularly the local sea turtle population.

Though I was unable to volunteer at La Tortuga Viva last summer, I want to highlight the amazing work of turtle conservation teams everywhere as they begin to look forward to the 2021 nesting season. But, before looking forward, I’d like to look back – at 2020’s nesting data.

I am not the only one who ended up cancelling travel plans in the quicksand of COVID-19’s constant protocol changes and status updates. By keeping many international travellers from tropical destinations, COVID travel restrictions provided a unique situation – the absence of tourists where they usually trash beaches and disturb nests. This allows us to investigate exactly what relationship exists between visitors and sea turtles around the world.

Most would assume that less traffic on the beaches meant fewer disturbances to nesting mothers and unhatched eggs. I reached out to a variety of turtle experts from my home in Virginia, and I learned that the biggest impacts of COVID-19 on sea turtle populations around the world stem from one thing: change in tourist volume.

Most would assume that less traffic on the beaches meant fewer disturbances to nesting mothers and unhatched eggs. 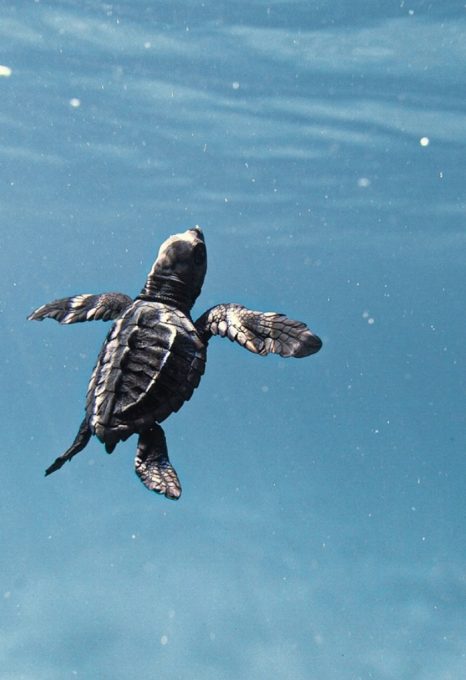 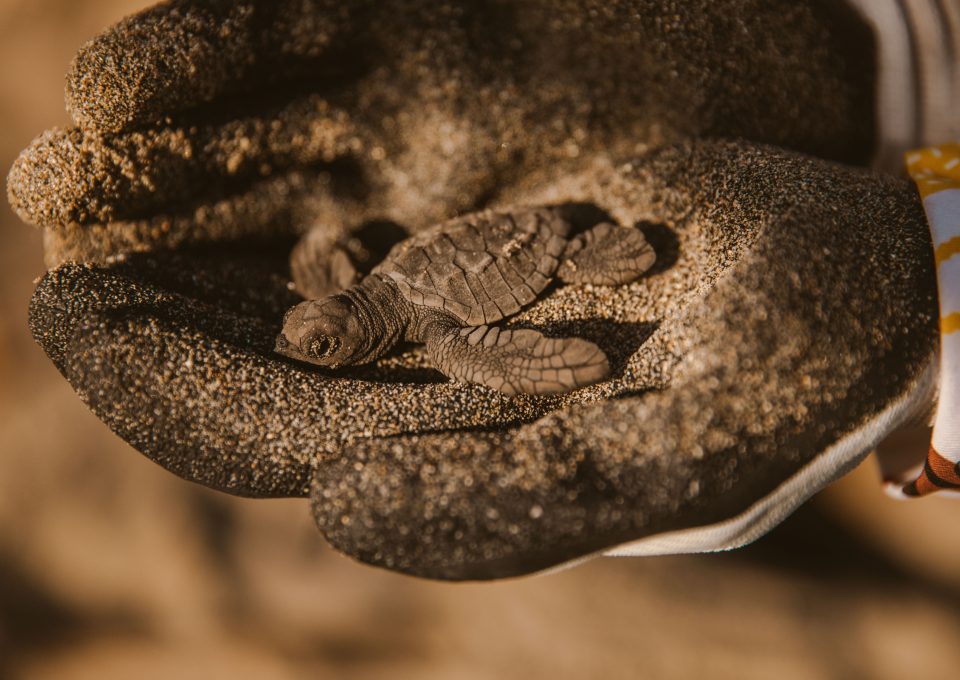 On some beaches in Maui, Hawaii, green sea turtles bask, or crawl up to the shore and rest during the day. Tourists often try to touch them, or even mistake the large, stationary creatures for rocks, and step or sit on them. Hawaii Wildlife Fund (HWF), a non-profit dedicated to environmental conservation, staffs the beach with volunteers to educate tourists and protect the turtles. Due to the state-wide shut down over the summer, they pulled their volunteers and crossed their fingers that beaches would be empty.

Historically, approximately 90% of Hawaiian green sea turtle nesting has occurred on the uninhabited French Frigate shoals (FFS), an isolated cluster of sand islets located around the middle of the archipelago. However, these islands are low in elevation and vulnerable to sea-level rise and storm damage, which puts sea turtle nests at risk of inundation. In 2018, Hurricane Walaka destroyed many of the preferred nesting beaches in the FFS. Since then, scientists in Hawaii have seen an increase in the number of Hawaiian green turtles nesting on the main Hawaiian Islands. This increase could also be due to sea level rise, which has risen at a conservative rate of 0.11 inches per year since 1993, and leaves Hawaiian greens with little choice but to nest on the main islands and puts them at greater risk of human interaction and damage.

In terms of changes in nesting behavior due to COVID-19, Hannah Bernard, Director of Hawaii Wildlife Fund (HWF), has noticed only minor differences. “We are talking about a pretty small increase in usage patterns,” she said. She noted an extension of a traditional nesting beach, so it now extends in front of a condo complex that had not seen nesting in the past. Due to COVID-19 travel restrictions, no guests were present in the condo when the nesting occurred.

For the Hawaiian green sea turtles, coronavirus thinned the crowds on their beaches, subsequently reducing the amount of sunscreen in the water. HWF has worked hard to help ban oxybenzone and octinoxate, two chemicals commonly found in sunscreens that pose a threat to Hawaii’s marine species and coral reefs. “Nature got her rest,” said Hannah, “and for us, the impact of COVID-19 on sea turtles has been more measurable in the change in the amount of sunscreen in the water than in nesting behaviour.”

Scientists in Hawaii have seen an increase in the number of Hawaiian green turtles nesting on the main Hawaiian Islands.

The economic impacts of reduced tourism are also hitting the island. According to the Maui Economic Development Board, approximately “80% of every dollar [for Maui county] is generated directly or indirectly by the tourism industry.”

HWF has responded by participating in food drives and putting education materials online, such as their Marine Debris Youth Education program. With little money coming in through tourism, many local families relied more heavily on the ocean for their food. This led to increased nearshore fishing efforts and heightened stress under stay-at-home orders.

At the Loggerhead Marinelife Center in Florida, Director of Research Dr. Justin Perrault has noticed changes in the daily operations of the organisation. Although the centre is free to the public, they accept in-person donations. Lockdown in Florida kept visitors away, leading to a drop in funds. This made it harder to keep their sea turtle hospital running and conduct research in the area.

Additionally, Dr. Perrault has been keeping an eye out for changes in turtle behaviour. “In a successful nest, a mother sea turtle crawls onto the beach, lays her eggs, and returns to the water. A ‘false crawl’ occurs when she turns around before she lays her eggs,” he told me. This can occur due to any number of reasons. “She can hit a piece of beach furniture, or get spooked by a person or artificial lighting.”

During the beach closure in 2020, data from the Loggerhead Marinelife Center shows a 12% increase in successful nests compared to previous years. This could be due to fewer run-ins with people or beach trash and other foreign objects.

During normal nesting seasons, locals follow guidelines to reduce light pollution that could disorient hatchlings. Baby sea turtles instinctively crawl towards light, which propels them toward the moon hanging over the horizon, safely delivering them to the ocean. However, according to Dr. Perrault, “Due to COVID-19, lots of snowbirds, or people who migrate from colder North America further south, stayed in their summer homes [along the coast], so we noticed a lot more light pollution on the beaches.”

This could have potentially impacted turtle hatchling disorientation rates. Typically, as sea turtles hatch from the nest, they crawl in a nice cone shape. “When they are disorientated, you see tracks that are horizontal to the water, crawling in circles, etc.” said Dr. Perrault. “The lack of human presence did lead to increases in nesting success, but we expect it to return to normal once things open up.”

In addition to land use changes, COVID-19 restrictions in Florida shut down waterways to personal boat use during quarantine. When Florida entered phase 2 opening on June 5, the Loggerhead Marinelife Center turtle hospital saw a large increase in patients with boat injuries. “The worst thing that can happen to a turtle is a boat strike. When the waterways reopened, everyone got back out on the water and we saw a lot more fresh injuries on our turtles,” said Dr. Perrault.

Just as in Hawaii, Florida’s economy relies on the beach. “We have evidence to suggest that humans on the beach have an impact on the behaviour and wellbeing of the animals,” said Dr. Perrault, “but you can’t shut it down. You have to create a compromise.” He proposes closing the beaches at night to provide the turtles with a safe, undisturbed nesting area, but opening during daylight hours with guidelines on how to behave in the presence of a nesting turtle. As the world slowly returns to normal, this could provide sea turtles in Florida with a chance to thrive.

“When they are disorientated, you see tracks that are horizontal to the water, crawling in circles, etc.” 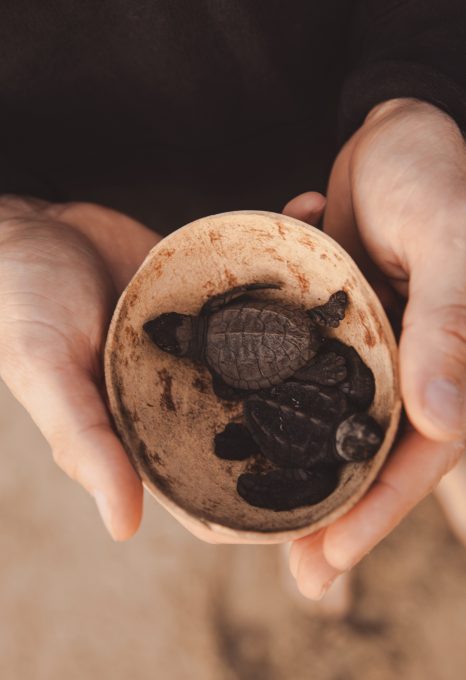 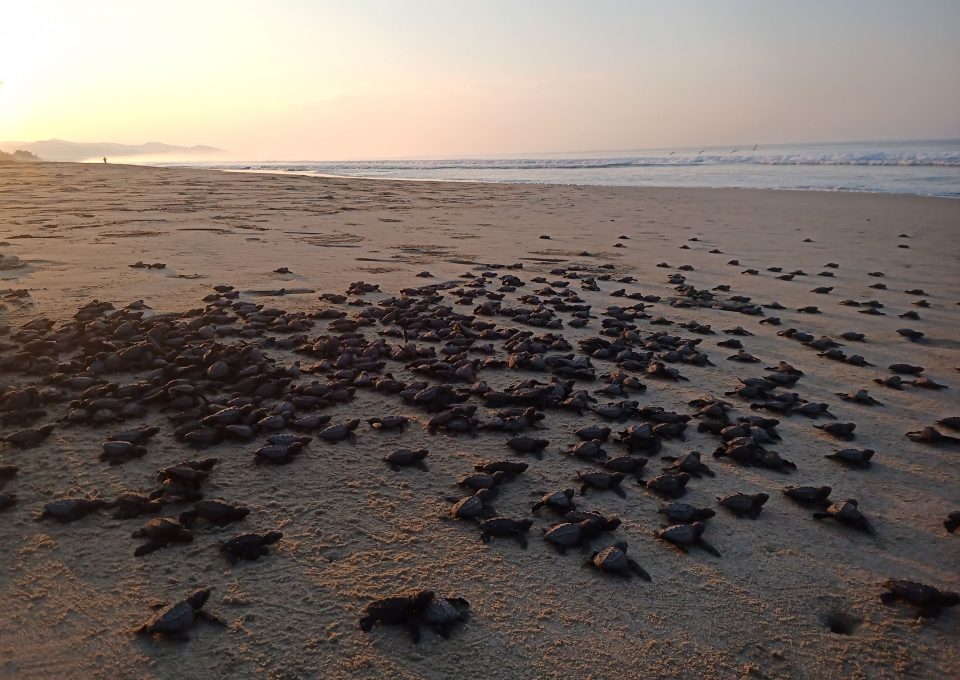 La Tortuga Viva’s budget is dependent on tourists at the hotel, so travel restrictions have put the local sea turtle population at greater risk.

However, LTV staff didn’t notice significant changes in sea turtle behaviour due to changes in tourist volume. This may be due to the isolated nature of LTV’s location in the town of Juluchuca. However, the lower numbers of tourists did impact the organisation as a whole. La Tortuga Viva runs under a model that is determined to prove that the best sea turtle conservation experts are former hunters. It relies on a team of ex-poachers to patrol the beaches and protect sea turtle nests. This creative solution to a large poaching problem provides each volunteer with a monthly food basket to support his family in exchange for his work protecting the nests.

Guests at sustainable eco-hotel La Playa Viva, the parent organisation of LTV, have the opportunity to participate in nightly beach patrols and nest releases, helping fund the LTV’s efforts with tips and donations. According to Raj Pandya at LTV, “COVID-19 has unfortunately deprived La Tortuga Viva of its largest source of income – Playa Viva guests.”

La Tortuga Viva’s budget is dependent on tourists at the hotel, so travel restrictions have put the local sea turtle population at greater risk. The lower the income of the program, the more vulnerable the nests are to poachers. Magdalena Ramos, who works in the sea turtle sanctuary at LTV, said, “donations to our local volunteer team empower them to continue their work. It is a complex issue to go from being a poacher to a conservationist and still care for a family at home.” Until it is safe to recruit long-term volunteers, La Tortuga Viva is focusing on fundraising and finding sponsors who can donate or adopt a nest, as well as putting energy into community development programs for the local area.

There is a delicate balance to strike between protecting sea turtles and human interests, as well as providing income for turtle conservation organisations. For all these teams, COVID-19 has posed unique challenges to a typical nesting season. While there have been some increases in successful nesting, there is no evidence they will continue when local and international travel return to normal.

The ocean provides food, income and joy to people all over the world. Rather than adopt an approach that bans people from the beaches in order to save the turtles or sacrifice turtle conservation for human comfort, a balance must be reached. It would be unreasonable to expect people to avoid beaches completely to protect nests, but there are ways to make beaches safer and more enjoyable for people and turtles alike.

In the meantime, there are things we can do to help turtles from the comfort of our own backyards, however far we are from tropical beaches. To take advice from Raj at La Tortuga Viva, “Donate if you can, volunteer when you can and learn to be an advocate for marine conservation. If you can’t do any of those, spread the word. Your voice carries a lot of power and it only takes the right person to listen at the right time.”

La Tortuga Viva’s budget is dependent on tourists at the hotel, so travel restrictions have put the local sea turtle population at greater risk.